Hailing all the way from San Fransisco, California, Mr. Holmes Bakehouse has come to Korea to share its cruffiny goodness with us Seoulites. As its first international branch, they wanted to ensure that the flavour and quality of their baked goods were up to Frisco standards, so all of the bakers received two months of training in San Francisco. With that kind of dedication, how could I not try it?! 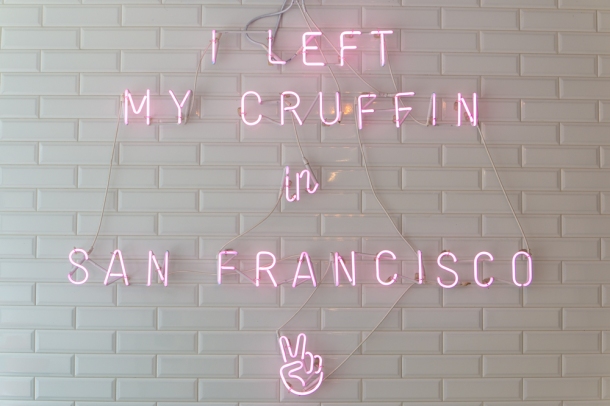 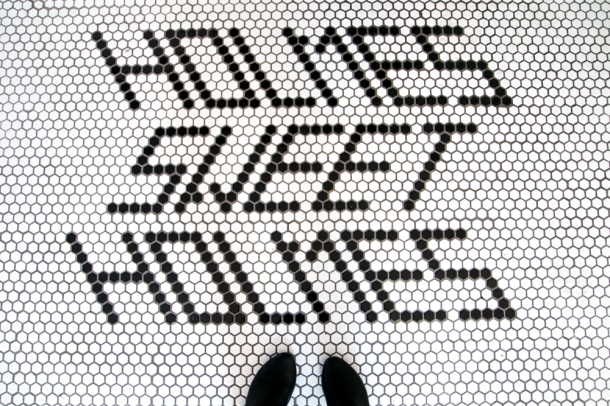 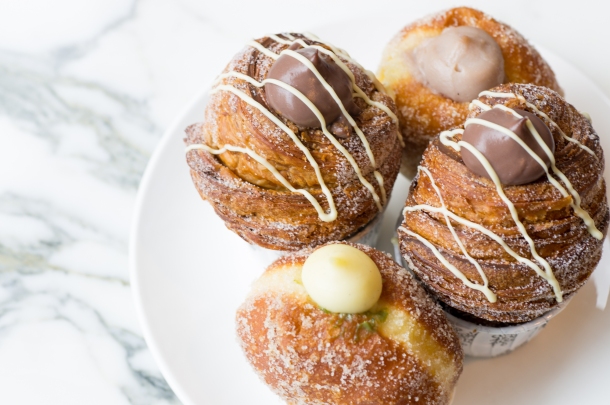 The shop is located along the trendy backstreets of 가로수길 (Garosugil) in 압구정 (Apgujeong). There are two floors of seating, each complete with walls of windows, pink neon signs, black and cream leather seats and gold accented marble tables. The overall vibe is very clean and chic, exactly what you’d expect out of 가로수길. I really love the look. I think the only thing I don’t care for much is the hardcore rap/ hip-hop they play sometimes. It’s not exactly the kind of thing you wanna hear while you’re munching on cruffins on a Sunday morning. 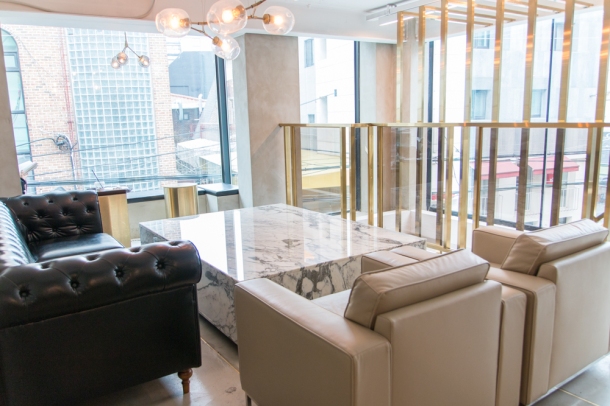 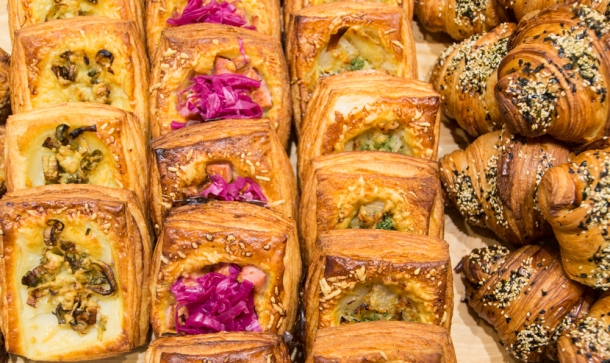 Mr. Holmes Bakehouse is most famous for their cruffins. With its croissant-like texture and muffin like appearance, I’d say overall it’s definitely more croissant than muffin. It’s soft, flaky and buttery, everything you want in a good croissant. It comes coated in sugar and stuffed with various cream fillings. I was really excited to try the 초코쿠키 (choco cookie aka cookies n’ cream) cruffin since that’s my flavour in just about everything. It was pretty good, but I wish the filling flavour was a bit stronger. The butter from the croissant seemed to overwhelm the choco cookie flavour. 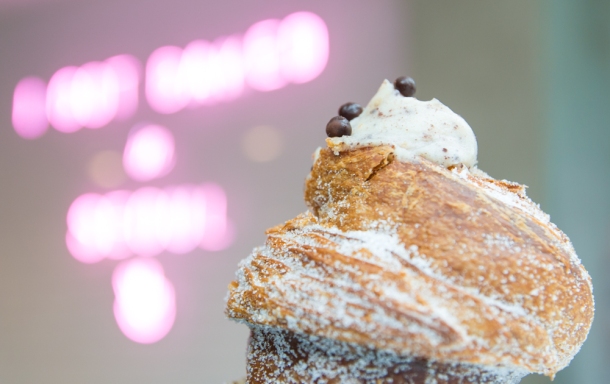 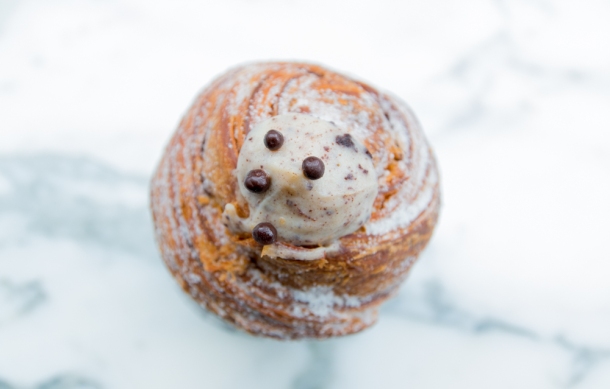 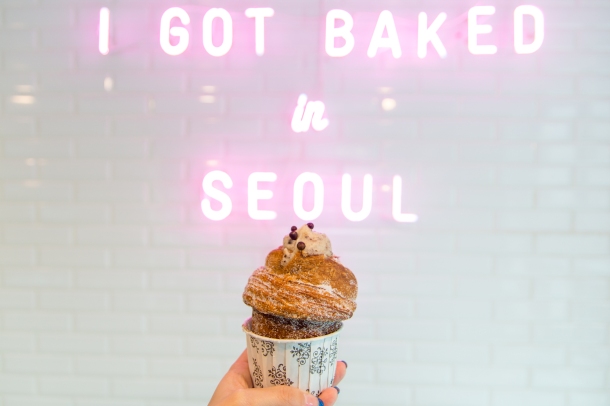 I have also tried their 핫초코 (hot chocolate) cruffin, which I liked much more. While the overall texture and flavour was the same, the filling made all the difference. The chocolate filling was much stronger in flavour and created a balance with the buttery croissant. It really remind me of Swiss Miss hot chocolate. Yum! 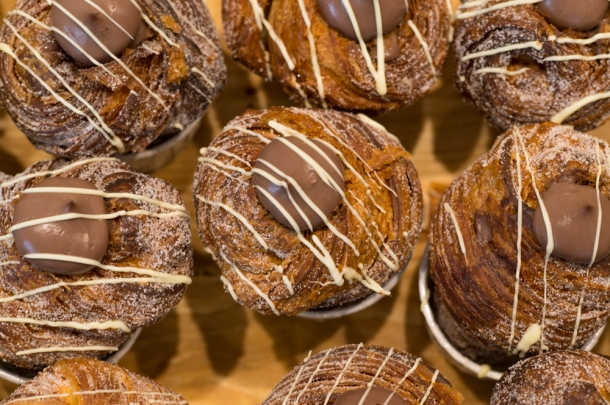 While their cruffins are quite popular, their brioche donuts come in at a very close second. These are simple French donuts made with butter, egg and sugar and stuffed with various cream fillings. The entire exterior of the donut is coated in sugar, so I was a bit concerned that it may be a bit too sweet, but that was not the case at all. The inside was soft and fluffy and the outside ever so slightly crisp. Like the cruffin, there is a sizeable amount of filling inside the brioche donuts as well, which is really refreshing since very few bakeries are that generous with their cream fillings. So far, I’ve tried their 파바나 (Passion Fruit + Banana = Panana) and it’s really delightful! The taste was fresh and fruity with a slight tang. Honestly I liked it a bit more than the cruffins. 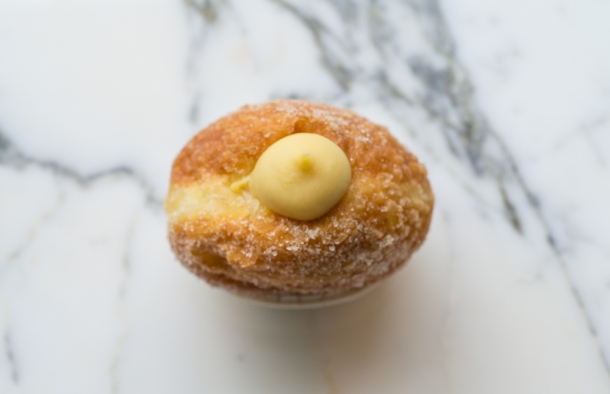 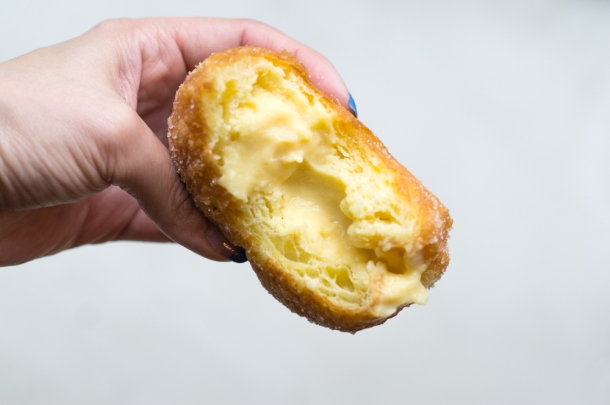 I’ve also tried the 녹차 화이트 가니쉬 (green tea white ganache) brioche donut. I was really excited about this one, since I’m a huge green tea lover. Unfortunately, most of the filling was white ganache with just a little bit of green tea in the middle. The ganache was quite good and tasted like vanilla bean, but there almost no green tea flavour at all. Needless to say I was a bit disappointed. 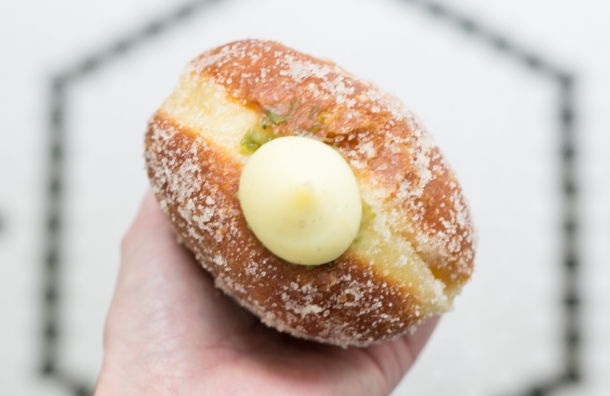 I’d say the overall flavour of these pastries relies heavily on the filling. The pastries themselves have a lightly sweetened butter flavour, so if the filling isn’t strong enough it can taste a bit bland. Other than that, I really enjoyed the pastries, though they are a bit pricey. I also took some cruffins home and ate them a day later and felt that they may actually taste even better a day old. What’s interesting is that the flavours of both the cruffins and donuts change daily. You can check out their Instagram or Facebook account for weekly updates. I guess this way you can always try something new, plus they keep you coming back for more. I am very interested to see what flavours they come up with next. 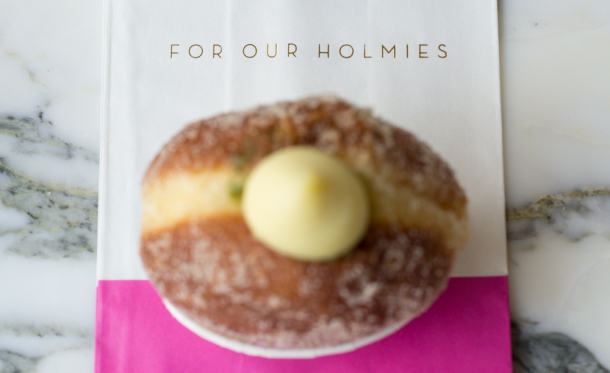 11 thoughts on “I Got Baked In Seoul: Mr. Holmes Bakehouse”

I love cooking at home! Korean dishes are actually quite easy to make, but they usually tend to be pretty time consuming. However, this is a pretty quick and easy 김치찌개 (kimchi jjigae) recipe imho. So, if you ever find yourself with a bunch of kimchi on your hands... give it a try! ☺
I've loved afternoon tea ever since I was a little girl and to be honest... I still do! I love all the little sandwiches, mini desserts and the beautiful tea sets. It just always made me feel fancy.
Lunar New Year (설날) was super busy for my family and I this year, so I didn't have much time to post about it.
There are plenty of cheap or even free fun things to do in Korea if you know where to look. For the first time since the pandemic, the ice skating rink in front of City Hall has returned.
I love 설날 traditions, but my favorite is the food. Food is my love language. Even though it's a lot of hard work, preparing this special meal for my family is one way I get to express my love for them ❤
새해복 많이 받으세요!!! Wishing you all a wonderful Lunar New Year from our family to yours 🐰
I love snow days in Korea. There is just something so magical about Seoul covered in a blanket of fresh snow. It's almost like a fairytale.
There are tons of delicious finds when you go to a traditional market in South Korea... but you haven't truly lived until you've had dinosaur roasted marshmallow ice cream.
My husband and I have totally different skin types, but in the winter we both have trouble with dry skin. So, we thought we'd mix things up this winter with a little moisturizing night routine.