In 1789, the French Revolution began with the storming of the Bastille (a state prison) in Paris. It was one of the greatest turning points in history. At this time, French soldiers had a single ice cream shop on their base camp. It was used to keep the soldiers awake and boost their morale. Although ice cream is often overlooked as a children’s dessert these days, it was not always so. In attempt to revamp ice cream’s image and restore its image to today’s trendy masses, Bastille was created.

Tying the name to its ambiance, Bastille boasts a subtle prison-like concept complete with a black and white color scheme, striped accents and prison jumpsuits for the employees. It’s a relatively small space with minimal seating. There are a few benches to sit on and a single table to stand at, but it is really more of a take-out place. Most customers stick around just long enough to take pictures of the lovely and delicious desserts. However, while everything shouts prison, the long glass windows slide open to allow for a more spacious and lovely open air effect.

In addition to Bastille’s chic appearance, the items on it’s menu are nothing short of enticing. First, you have to choose a flavor of ice cream. All of the flavors are developed and made exclusively for and by Bastille and will cost you ₩4,000. There are three cereal infused soft serve ice cream flavors to choose from: Cinnamon Toast Crunch, Chocolate Chex and Corn Flakes. I absolutely love cinnamon toast crunch, so needless to say I’m quite bias when I say this is the best ice cream flavor. 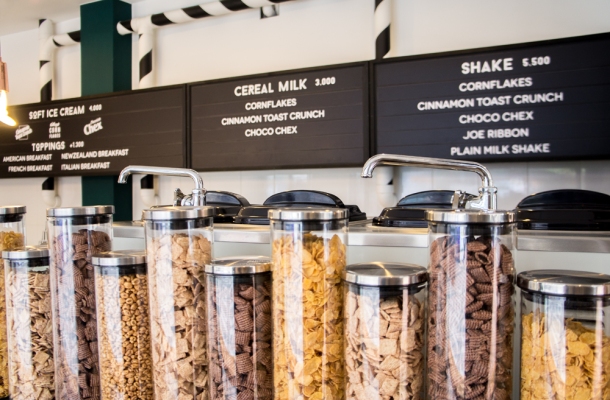 Next, you can choose your “breakfast topping.” This is an additional ₩1,500 and consists of two high quality ingredients, one being a dominant flavor and  the other a complimentary flavor. The four options are: French Breakfast (Mountain Andes pink salt with nougatine chocolate), Italian Breakfast (Bolivian chancaca with macarons), American Breakfast (Canadian maple syrup with bacon) and New Zealand Breakfast (Manuka honey with potato chips). While I have tried all the toppings, I haven’t tried all the combinations yet. At the moment, I would have to say my favorite is the cinnamon toast crunch ice cream with Italian Breakfast. This is probably the sweetest combination, as everything else has a pretty good balance of sweet and salty.

Each order comes served in a cup of dry ice. “Soft serve melts quickly so we use dry ice to prevent it from melting and also for its visual effect,” said co-founder Jiuk Hur who took a few minutes to chat with me. In addition to soft serve, they also serve shakes and cereal milk, which is milk infused with various cereal flavors. Joe Ribbon is currently the most popular shake, as it is made using Jolly Pong, a Korean cereal-like snack. It was certainly a favorite of my boyfriend’s. Hur added that they intend to “keep things simple and make this place known for one main thing… cereal.” So although they plan to add and change the menu from time to time, they don’t want to overcrowd the menu. 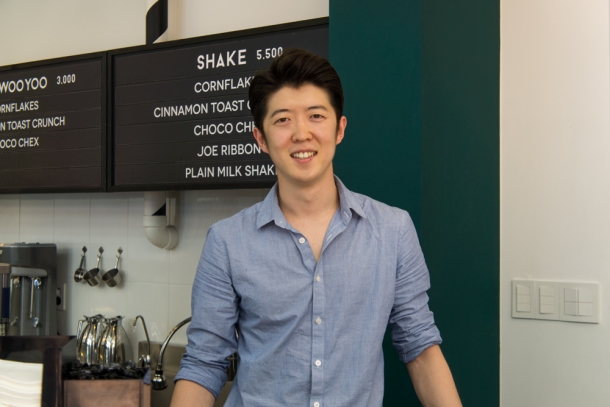 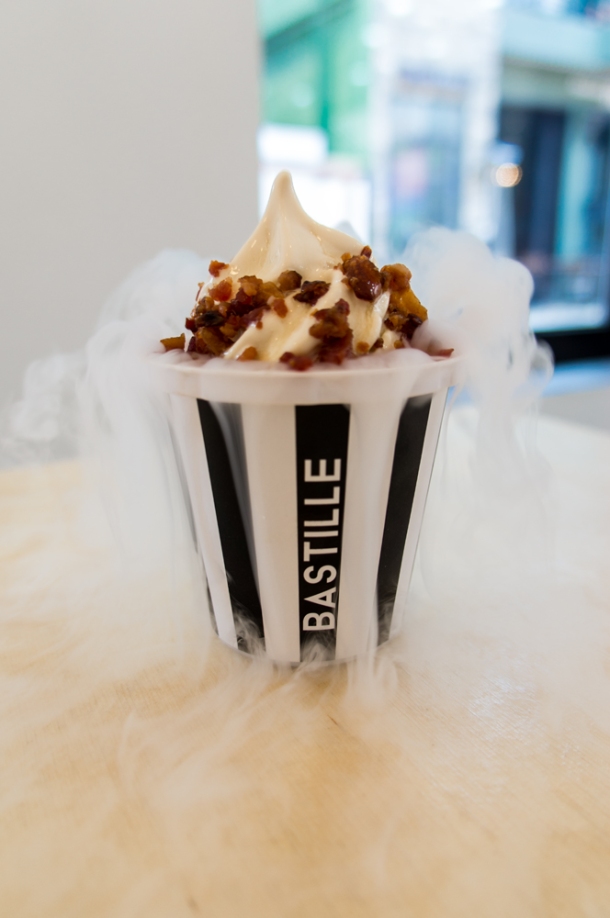 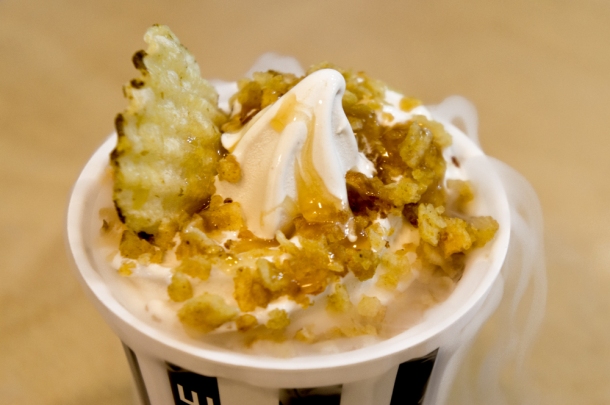 All in all… if this is prison, then you can lock me in and throw away the key. Bastille is definitely going to be one of the “coolest” spots in Seoul this summer, but if 이태원 (Itaewon) is too far for you I have good news! New locations will be opening very soon in places like 가로수 길 (Garosugil), the Lotte Mall in 명동 (Myeongdong) and even 수원 (Suwon). And although summer is just beginning, plans are already underway for their new winter items which may include cereal milk tea and coffee. With ideas like that, I certainly cannot wait to see what else Bastille has in store for us.

The happiest of birthdays to my handsome hubby @songdraws 🎉
I feel like there are BTS cup sleeve events every month here in Seoul (not complaining). This time, the event was to celebrate Jin's new album drop. I'm totally obsessed with "The Astronaut" and this was such a cute way to celebrate! What do you think about Jin's new single?
As the weather begins to get chilly and the leaves start to fall... we know winter is abruptly approaching here in Korea. BUT before it does, there is still time to enjoy the outdoors and find yourself a beautiful cafe to enjoy the view from.
It seems like autumn is coming to a close and I'm just trying to enjoy as much outdoor cafe time and crunchy leaves as possible.
The autumn leaves are quickly fading, but luckily the weather has warmed up enough to sit outside and enjoy the view with a hot cup of coffee.
Korea is full of beautiful places to enjoy the colorful autumn foliage, many of which are right here in Seoul!
Fall is a perfect time to visit Korea. You don't even need to travel outside of Seoul to experience the breathtaking autumn foliage, there's plenty to see right here in the city! So if you plan to be here in November... here's what to expect.
Our hearts go out to the all victims, their families and loved ones during this tragic time. There are joint altars spread across the country for those who wish to pay their respects and flowers available around Itaewon station to place at the memorial site.
Walking into Halloween weekend like...