Hello all! Hope everyone has been enjoying their holidays, I know I have. Well, I thought I’d slip in one more post before the new year, so I thought I’d write about my birthday. As always, I had two celebrations: one with my awesome friends and another with my wonderful boyfriend. Since I wrote about my birthday with my boyfriend last year, I’ll write about my friends this time and give a bit of info on drinking culture too.

The drinking culture is a big part of Korean lifestyle. It’s about bonding, unwinding and just enjoying time with your “family” whether it’s your family of friends, work family, classmate family or what have you. While many people don’t actually enjoy drinking all the time, it is the easiest way to socialize and the best way for people to unwind and get to brass tacks. To be honest, it’s actually an important skill that requires etiquette and endurance; meaning you have to be able to drink a lot without making and ass of yourself (though not everyone can meet the challenge). Above all you are still expected to mind your manners to your elders, with pacing being all important. 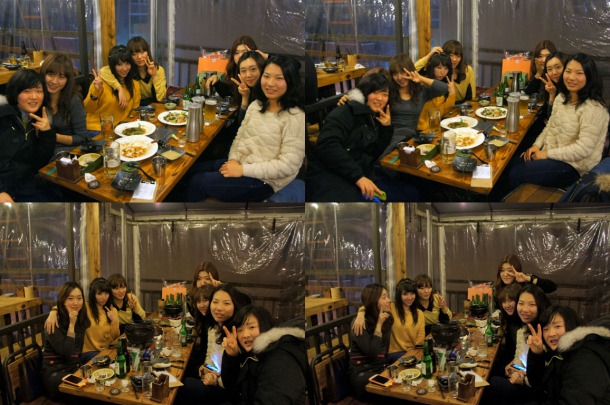 Unlike stateside, drinking is done in rounds or “차” (Cha). There are usually at least three rounds, but five is the average (particularly on weekends). So let’s walk through the process:

Round one is typically at some sort of  고기집 (BBQ Restaurant) or Izakaya (Japanese Restaurant) for dinner and the first round of drinks. We went to an Izakaya called 맛있는교토 in the 홍대 (Hongdae) area and the food was fantastic! While I have my regular group of girlfriends it is not uncommon for them to bring along some of their other girlfriends. That’s when the first round of drinks is crucial. It’s a necessary ice breaker to melt away that incredibly awkward first encounter. 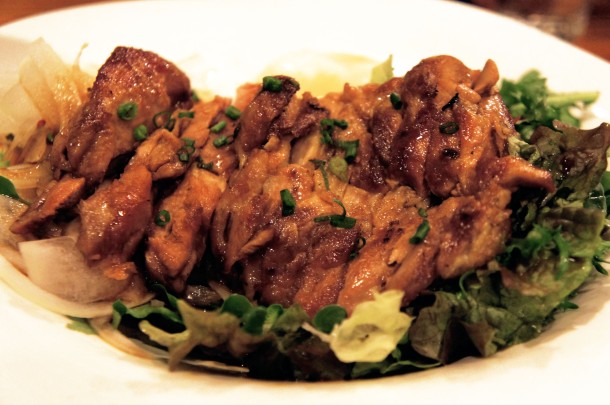 Drinking games are also a good way to get everyone out of their shells. One of my favorites is a simple game. You take a soju cap, twist the left over aluminum into a tight spiral, stick a tissue into the cap and take turns trying to flick off the spiral. Whoever flicks it off wins and the people to their direct right and left have to take a shot of soju. After that, the winner gets to remove the tissue from the cap and look at a secret number imprinted on the bottom. Then everyone takes turns trying to not guess the number (that will be between 1 & 50) and the winner can only respond with up/ down. The person to guess the number loses and gets to pick one other “lucky” soul to take a shot of soju with them. 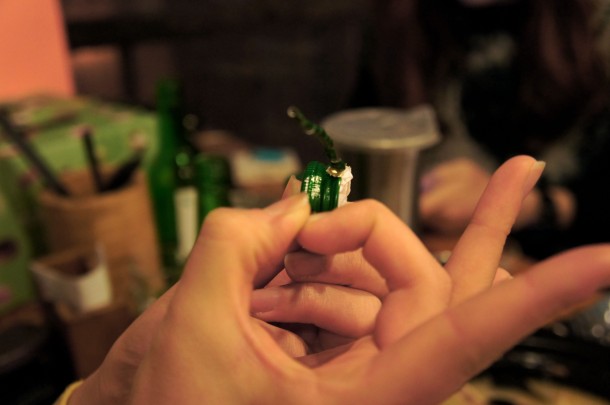 Although rounds are typically evenly spread out, it was cold and snowy so we stuck around for about five hours and indulged in various types of japanese dishes. We ended the round with the annihilation of my incredibly cute whale of a birthday cake. Finally, after lots of food, drinks and games we were ready to move on. At this point it was time to say goodbye to some friends and meet up with new ones. 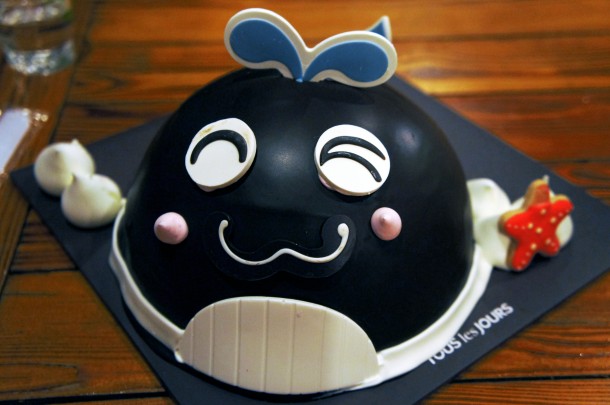 The next location change is usually to some sort of nearby bar or hof. By this point everyone is pretty comfortable with each other and ready for some heavy drinking. Usually you stick around here for 2-3 hours. This round consists of 소주 (soju), 맥주 (beer) and 안주 (anju). In Korea, side dishes are always eaten with drinks, this is called 안주. These days it’s also used as a chaser for that nail polish remover we call soju.

In my case we headed over to a 주막 (Jumak), which is a traditional Korean tavern. Here we had 막걸리 (Makgeolli) Korean rice wine, coupled with 두부 김치 (Dubu Kimchi) which is sautéed kimchi served with tofu. If you’re a foodie like me, drinking culture is a great way to try all kinds of different Korean foods in one night. 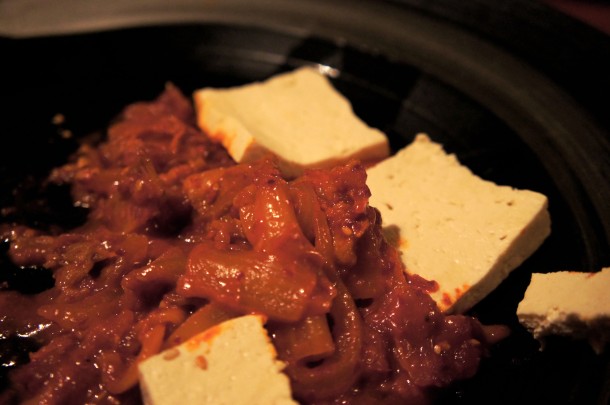 Add in some more food, booze and drinking games and you’re well on your way to conquering Round 2. Depending on the crowd and tolerance, this’ll be where people start passing out and falling asleep on sidewalks. If not, then congratulations you’re on your way to Round 3!

On to Round 3, which is yet another bar or hof, but is a little more drinking and a little less food. This is usually another 2 hour stop. As rounds progress, it is only natural for people to get off the bandwagon little by little. No matter how much you drink, however, it’s important to always keep your manners about you.

Age is very important to keep in mind when you’re out drinking. The only perk of being the eldest in my group is the respect factor, otherwise it really sucks being one year older in Korea because of the lunar calendar. Most of my friends call me 언니 (Unni= elder sister) and usually the elder holds a level of seniority. When receiving a drink from or pouring a drink for your elder you should always use both hands and turn you face away from them when you drink. Also, the eldest should never have to pour their own drink. When you are really close friends with someone this doesn’t always apply, but it really depends on the person.

As the rounds get progressively later, the games will get progressively harder. There’s usually a few holdouts who have been keeping sober and playing around the edges. By the time Round 3 is finished, they’ll have joined in the game and you’ll have a few more drunk and rowdy passengers for the next round.

**Side note: when pouring drinks for people much older than you, it is important for them to finish their drink COMPLETELY before you refill it. It is a Korean superstition that if you refill it before their done, it means they will marry more than once. You don’t want to be the jerk responsible for someone’s failed marriage do you?

Round 4 (The Bonus Round)

This time around, I finished my night at Round 3, since it was 5am already. Normally, however, Round 4 is the point where everyone reeks of soju and cigarettes and is full of new found booze energy.

This surge of newfound booze energy is coupled with a lack of rules. While the “Age Laws” will still be in effect, most of the other rules go out the window and you start the Bonus Round.

This will inevitably land you in a club or  노래방 (noraebang= karaoke room) where, as you might have guessed, will include more drinking for another couple of hours accompanied by Korean love ballads from the 80’s, 90’s and more recent bubblegum Kpop.

Round 5 (aka Tomorrow Morning)

Due to pure logistics and timing, unless you started Round 1 at 3 pm you’ve now run into the cold bastard of sunlight and realized that you only have an hour or two before you have to shower and head to work (or not).

If you’re alive by this point, congratulations you are now Korean! As your reward, you get to go to one last bar/ hof. This is where everyone gets together to wind down with a few more drinks and some kind of 해장국 (haejangguk) before parting ways. 해장국 is a Korean hangover soup. There are lots of different variations on this soup depending on the region, so there is really no one way to make it. The science behind it though is that the combination of fibers and spices help with digestion, while the bacteria in kimchi helps detox your body.

The good news is that all this detoxification and fiber will help you in 4 to 8 hours when hangover symptoms start to settle in. The bad news? You’re still drunk and there is no remedy for that.

So there you have it, my birthday and Korean drinking culture in a nutshell. Hope this helps you with your future drinking endeavors Korea. It’s a great way to have adventures and meet new people, so why not have one tonight? Be safe and see you again in the New Year!

7 thoughts on “My Korean Birthday”

This has got to be the coolest looking Starbucks in Korea! While Starbucks in Jeju is known for its unique tangerine and green tea inspired menu, this particular location is known for its unique exterior as well.
This is how @glassofuyu goes on vacation. Some would call him spoiled... and they'd be right. On a scale of one to a million, how spoiled is your pup? 😂
I've been receiving LOTS of dms after my last Hybe post, asking about the ticketing and reservation system. So, I made a short video to help you with the process. Hope you find it helpful 💜
Hybe is finally back up and running just in time for summer! If you're ARMY, it's a definite must see when you come to Seoul. And don't forget to pick up an exclusive Hybe mic badge from the gift shop at the end. I got V and JK's... whose would you get?
After shutting down for renovations, Hybe Insight Museum is finally back up and running!
Sometimes you just wanna make tiktok dance videos, whether the other person wants to or not 😂 Who's your tiktok partner in crime?
Seoul has some of the best nail salons, but how do you choose the right one? While pricing and skill are a given, I prefer smaller one on one places. These salons always have a more relaxed and personal touch and often come with furry companions 😽💕
My mom came all the way from California to go to all the BTS Pop-ups and recruit me into the ARMY 😂
Summer is upon us and if you happen to find yourself in Korea... you may hear the island of Jeju calling! If food is your love language, you will definitely be swept off your feet. How much could you eat?