I think it’s inevitable… if I’m ever in California, there with definitely be time made for a trip to Disneyland, even if I have to go alone. Luckily I didn’t have to go alone because my mom is always down for a good Disney trip. Having just come back from my Shanghai Disneyland trip, I didn’t feel too much of a need to go on ALL the rides. This time around I decided to focus a little bit on shopping and a lotta bit on food!

The Tropical Hideaway is the newest addition to Disneyland’s food scene and home to a whole lot of Dole Whip options. The menu item that sparked joy for us was the Loaded Dole Whip. This came with a plate full of orange-pineapple swirl whip topped with fresh mandarin and pineapple pieces and garnished with crystalized hibiscus, shredded coconut and pocky sticks. Dole Whip lovers rejoice because this was honestly the most delicious dole whip by far. It’s sweet, tangy and incredibly refreshing. I can definitely see these selling out during the summer time.

Aside from Dole Whip, they also have a small selection of steamed bao: lime chicken, spiced vegetable and bulgogi beef. Being the carnivores we are, we went for the Lime Chicken Bao which comes stuffed with butternut squash, lime, fresh herbs and of course chicken and the Bulgogi Beef Bao which is filled with sweet chilies, potatoes and marinated beef. As someone who lives in Asia and eats dumplings and bao on a pretty regular basis, I have to say these were pretty freakin’ delicious. The bun was soft, there was a reasonable amount of filling and they were full of flavor. If I’m being totally honest, the Bulgogi Beef Bao was definitely the best. It was bursting with flavor and the potatoes were crazy soft. I drool a little just thinking about it. 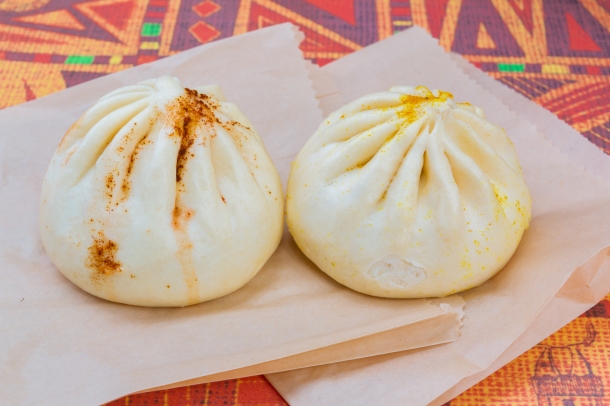 Over in Toontown, my mom took me to Carabelle’s where she introduced me to the Mickey Chocolate Chip Cookie Cupcake. Don’t be fooled though, this is no cupcake, but rather a cookie baked in a cupcake tin. So what you end up with is a super thick chocolate chip cookie topped with buttercream frosting, birthday sprinkles, a glitter macaron, sugar candle, and chocolate ears and party hat. I’ll tell you right now, it was the most adorable dessert I had all day. As for the taste… fantastic! The buttercream was really light and not overly sweet, almost like whipped cream. Apparently they used to use a thicker, sweeter frosting, closer to birthday cake frosting, but it was a bit of an overkill, so they changed it. My mom had tried that version and agreed that the new frosting was a welcome change. But the real showstopper here is the cookie. I could eat THAT cookie everyday. It was the perfect chocolate chip cookie in every way, soft in the middle with crispy edges and just the right amount of chocolate chips. 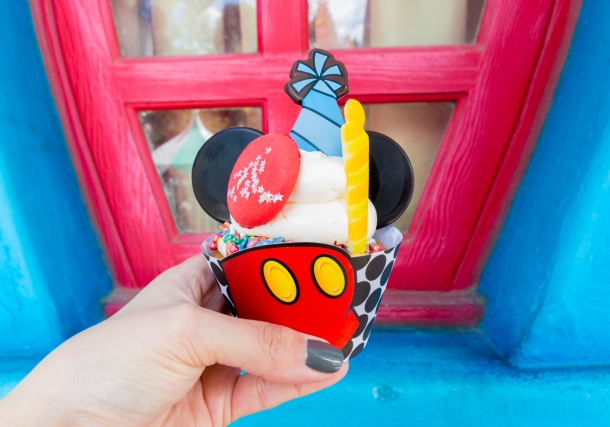 Waddling our way over to California Adventure, we made our way to the Food & Wine Festival. Luckily I got to check it out before it ended. That being said, I was wildly unimpressed with this year’s selection. There was only one booth that caught our attention and that was Golden Dreams. We got a plate of their Anaheim Chile Relleno Bites with Salasa Verde. There was nothing particularly special about this plate other than the fact that they were some really solid chile relleno bites. Very well made, totally delicious, but for $6.75 I would have expected to get more than 2 bites. Disney prices, am I right?

To wash everything down, we ordered a Cinnamon Whisky & Frozen Lemon Cocktail. I’m not a whisky girl. I’ve tried on various occasions to be said whisky girl, but I just don’t like whisky. On that note, this drink was glorious! It kind of tasted like Big Red gum and lemonade, but in the best way. It was super refreshing and the alcohol flavor was almost non existent. A dangerous drink indeed. 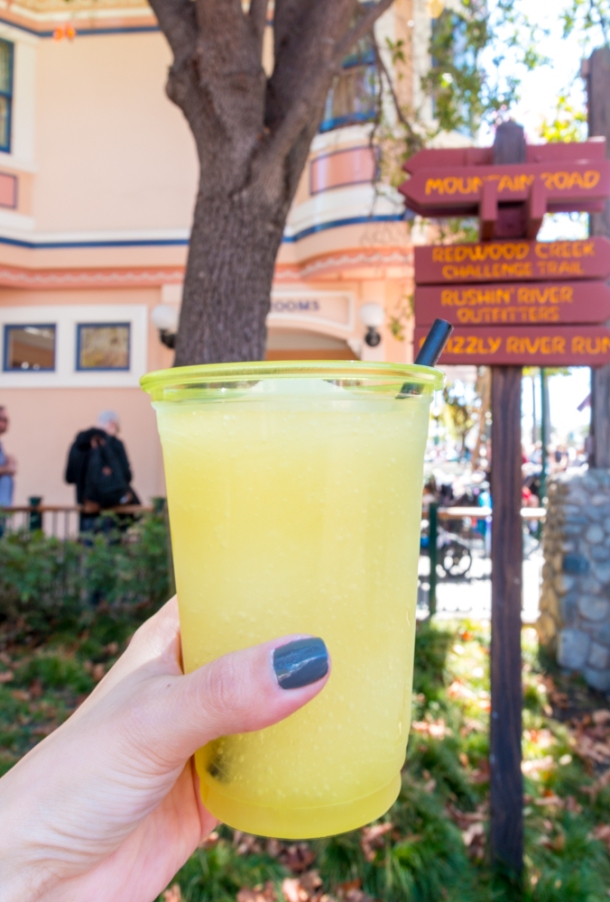 At this point, we thought it best to slow down on the food a bit so we could ride the Guardians of the Galaxy without wanting to puke, but then we saw the Fiesta Cone over in Cars Land and all logic went out the window. This cone came stuffed to the brim with spicy ground beef, refried beans, shredded lettuce, cheese sauce, sour cream, pico de gallo and topped with crispy tortilla chips. It’s basically a taco in a cone… which is awesome! It was super flavorful and incredibly filling, but personally I still like their Bacon Mac ‘n’ Cheese Cone best. 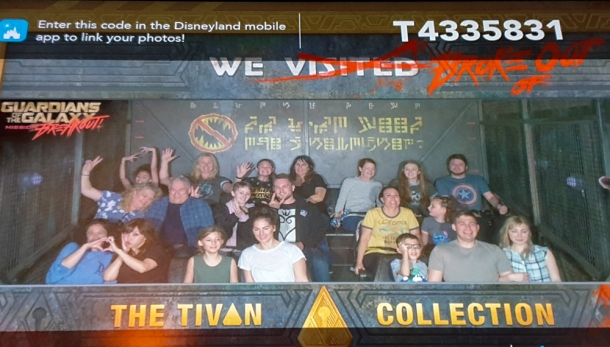 The last stop on this food train was Schmoozies because I had been dying to try their Mickey Cookies ’N Cream Shake. Now I’ve had a lot of cookies ’n cream shakes in my day, but this definitely makes the top of my list. The shake was thick with plenty of cookies, no ice chunks and definitely not watered down. The rim of the cup is dipped in whipped cream and red sugar crystals with two yellow chocolate “buttons.” The shake itself is topped with more whipped cream, Mickey themed sprinkles and two Oreo cookies. It is easily one of the most photogenic drinks the park has to offer.

As if that wasn’t enough of a sugar rush, I decided to try and squeeze in one more treat, a Minnie Donut with Cherry Filling. This is definitely more of a cronut than a donut. It’s crispy on the outside, soft on the inside with a general flakiness to it. The inside is filled with a cherry filling and the top of the donut was dipped in red chocolate, Mickey themed sprinkles, a chocolate Minnie bow and two Oreos for ears. It actually pairs really nicely with the shake, but it’s also heavy; I mean physically heavy. I couldn’t lift it without the plate looking like it was about to collapse. In the end, I simple couldn’t finish it so I got it wrapped up to go. I did really like the flavor though, it reminded me quite a bit of those old Hostess Cherry pies you could buy from the convenience stores. I wasn’t really my mom’s thing, but it was pure nostalgia for me. 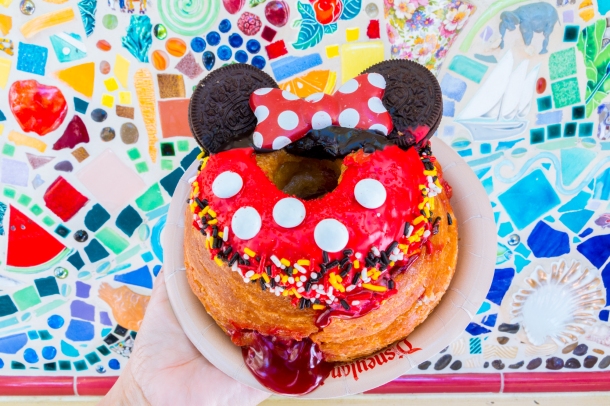 This was actually one of our shortest Disneyland visits, but probably one of our most ful”filling.” We decided to cut out late afternoon because we were literally going into food comas. I’d definitely call that a successful visit. Our favorite food of the day was unanimously the Loaded Dole Whip. If you get the chance, I highly recommend it. Do you have a favorite Disneyland food recommendation? Be sure to let me know in the comment box! Until next time…

There was an error retrieving images from Instagram. An attempt will be remade in a few minutes.