A few years ago I visited a small cafe that opened up next to my house in (Hapjeong). It was small with some interesting ideas, but I felt like it was still trying to find itself. After a while, I was curious about its progress so I returned to check it out. 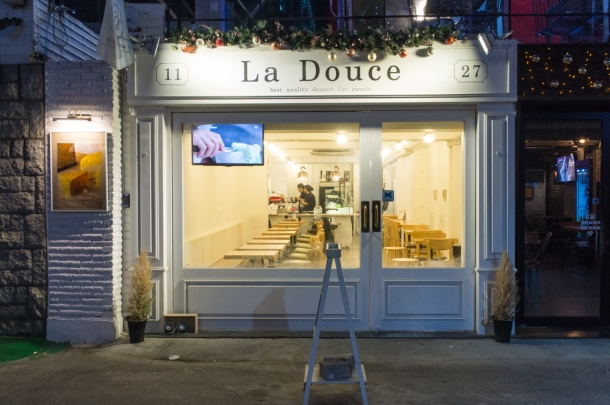 La Douce is a small dessert cafe in Hapjeong run by Chef Kim Gun Woo (김건우) and his team, all of whom studied culinary arts in Rhode Island back stateside. Everyone speaks English, which is awesome. So if your ever curious about anything feel free to ask. Chef Kim is pretty much an open book, and he’s very passionate about what he does and sharing what he does with others. 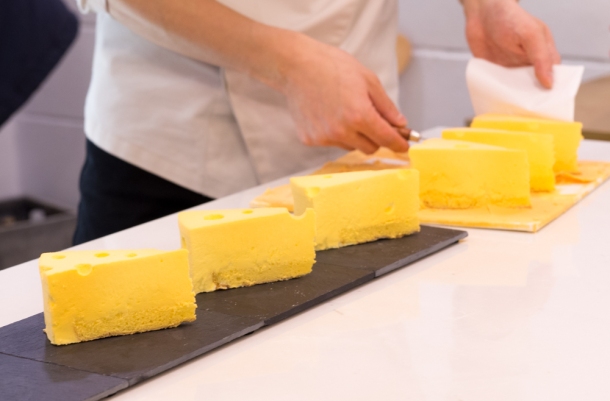 When I found the cafe, I was surprise to learn that it had moved 3 times before. If you’re familiar with the area, Hapjeong is becoming the new up and coming neighbourhood. It sounds cool, but in reality its driving a lot of these small businesses (which make the area so unique) out of business due to increasing rent prices and stingy landlords. It’s really a shame and one of the main reasons why I moved out of there. Chef Kim shared that he was ready to give up, but instead decided to relocate his cafe again.

Honestly, I like the new location better anyway. The interior has a very open and clean look: white walls and counters, natural woods, and gold accents. It’s a bit narrow, but definitely bigger that it’s first location. I really like their open kitchen/ counter space. On any given day, you can walk into to find the chefs working on cakes. Watching them at work almost makes you feel like you can make a cake too… almost.

Right now, the hottest item on their menu would be their cheesecake. I can’t really say I’m too surprised though, since each slice is made to resemble a slice of swiss cheese. It’s like something right out of Tom and Jerry (the inspiration behind it’s unconventional appearance). Additionally, this isn’t your traditional New York cheesecake either. Rather, if a moose cake and a cheesecake got together and had a baby… this would be it. The cheesecake is light and creamy with a slightly lemony tang. Instead of crust the base is a thin layer of moist sponge cake. It does an excellent job of soaking up the flavour and moisture from the cheesecake, giving the cake a slightly denser texture. 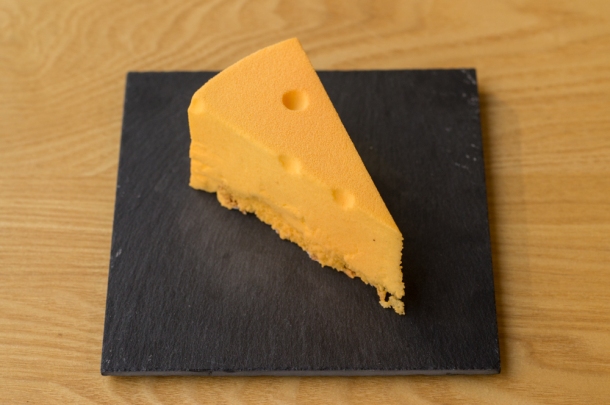 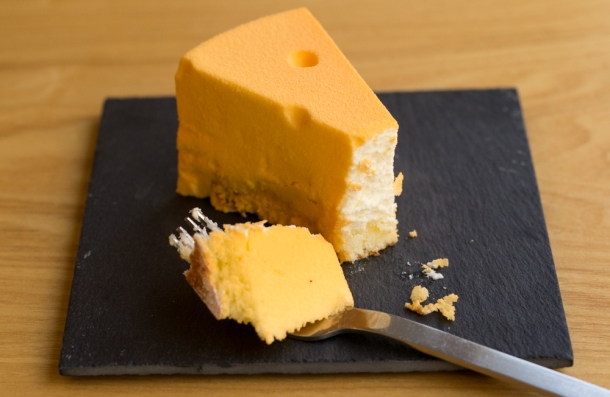 The most interesting part of the cake is the shell-like coating which transforms each cake slice into a “slice of cheese.” Though the chef challenged me to guess the ingredient, I simply couldn’t put my finger on it. As it turns out, it’s cacao butter! It’s a bit like a thin chocolate coating that instantly melts in your mouth! Finally, the “cheese” is air-brushed to  give it its signature yellow colour. That’s a lot of work put into one slice of handmade cheesecake!

Right now, their seasonal menu includes a strawberry shortcake. It’s a simple cake layered with fluffy cream and fresh strawberries. Typically I don’t go for these types of cake because they tend to have very little flavour and are always more cream than cake, but I decided to give it a shot. In a word, it was light… so light! The cream and cake were well balanced, it was moist and just about all the flavour came from the juicy strawberries. It felt like a guild-free cake. It didn’t make me feel full and bloated afterwards, the perfect spring dessert. 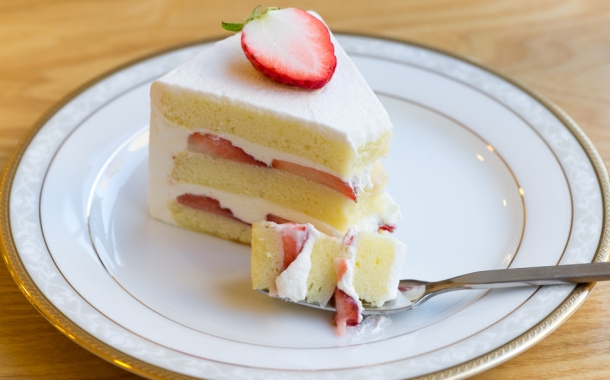 As for the drink menu, it’s quite decent and has a little bit of everything: coffee variations, teas, tea lattes and ades.  However, the real crowd pleaser would have to be their 3D art lattes. You can order any latte of your choosing, hot or iced, and they will create magical 3D foam art on top. It’s so cute! Actually if you look on their menu, you won’t find the 3D lattes because it’s not actually an item. The art is just a service they provide simply because customers (like myself) enjoy it. 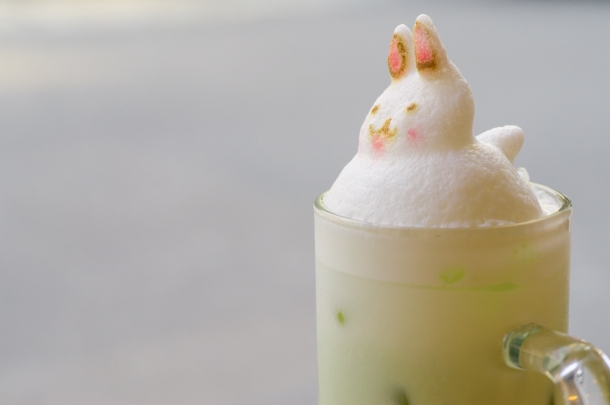 It took months of self taught practice to acquire the skills to do this. Looking back at how they were when they first opened, they have come quite a long way! Not only does the shape of the latte art last longer, but they can also make a variety of animals. If you happen to catch them when it’s not busy, you might even be able to request your favourite animal. In my case, I’m a huge Disney/ Marvel nerd and they were kind enough to put Baymax in my coffee, you know… as a personal healthcare companion.

In addition to their select regular menu items such as banana pudding, crepe cake and milk roll cake, they also have seasonal items and holiday specials based on the ingredients available at the time. Since they only use fresh local ingredients in their desserts, the quality is always good and nothing is ever frozen. I definitely recommend checking them out. It’s a great place to grab a cup of coffee and indulge yourself in some cute eats.

While today is definitely a day of love and happiness, it's also a time of sorrow. Our 4 year wedding anniversary has come on the heels of my grandfather's passing and I have really been struggling to get through each day... to exist in a world where he doesn't.
We are finally heading into autumn here in Korea and I’m so ready! I’m ready for colorful leaves, cozy sweaters and warm cups of tea. 🫖
Sumokwon Park Night Market (수목원길 야시장) is less of a traditional market and more of a modern night market, similar to ones in Seoul and other mainland cities.
As Uyu gets older, we feel less and less comfortable leaving him at home for too long or dropping him off at a pet hotel.
Have you seen pink muhly? While it’s not native to Korea, it made its debut back in 2014 on Jeju Island. Since then, it has become a growing part of Korea’s autumn landscape.
In celebration of Spirited Away's 20th Anniversary, a special pop-up cafe and store opened up right here in Seoul! 🐉
We love going to our local 시장 or traditional market to buy cheap and fresh produce or simply snack around.
추석 잘 보내세용 친구들! Happy Chuseok from our family to yours 🥰
추석 (Korean Thanksgiving) is around the corner and I can't wait! We have 5 days off and while I have a ton of stuff to do in preparation of Chuseok day, I'm definitely looking forward to just chilling with the fam.