Back in September my boyfriend and I took a two week trip to India to attend the wedding of one our closest friends. To say it was memorable would be an enormous understatement. Neither of us had ever been in a country so far out of our comfort zones and it won’t soon be adventure we forget. A lot happened, many photos were taken and we experienced so much that it’ll take me some time before I get it all posted here on my blog. For now, I will start with my favorite landmark, the Qutb Complex.

The Qutb Complex is located in Delhi, and it is a collection of ancient historical monuments designated as a UNESCO World Heritage Site. The Qutb Complex is composed of a mosque and several tombs and pillars. By description alone it doesn’t sound like much, but in person it will completely captivate you. What stood out to me most was the Qutb Minar. Built in 1193, it is the tallest minaret in the world, measuring 72.5 metres (239 ft) in length with five distinct stories. What I found most interesting about it, rather than its height, were the bands of intricate hand carved islamic calligraphy that wrapped around it (verses from the Qur’an). It was beautiful and exotic. I can’t imagine how long it must have taken to complete. 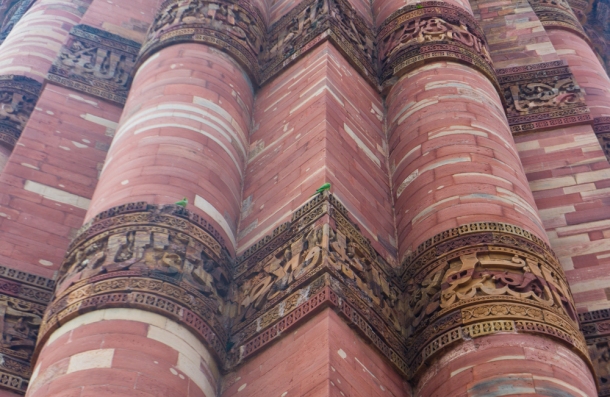 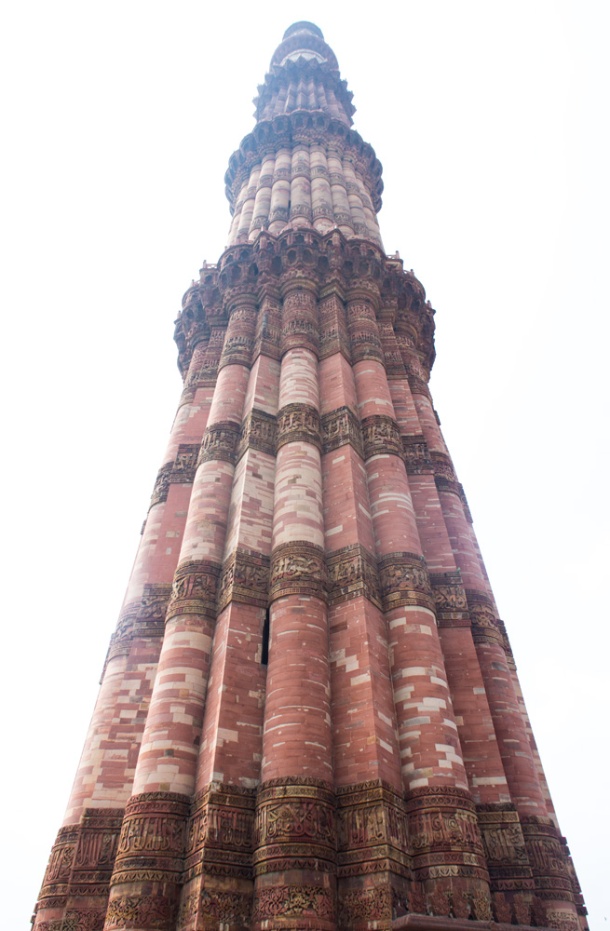 There was something incredibly humbling about being in the presence of such magnificent architecture. The boyfriend and I were in awe the entire time. We ran our hands across every surface, tracing each carved stone with our fingers. We seriously touched everything! Every stone held beautiful intricate carvings and it felt as though time had only made it more beautiful to behold, despite its state of ruin. We apparently weren’t the only ones to think so, as we found groups of art student scattered around the area sketching. There were also several school field trips taking place. 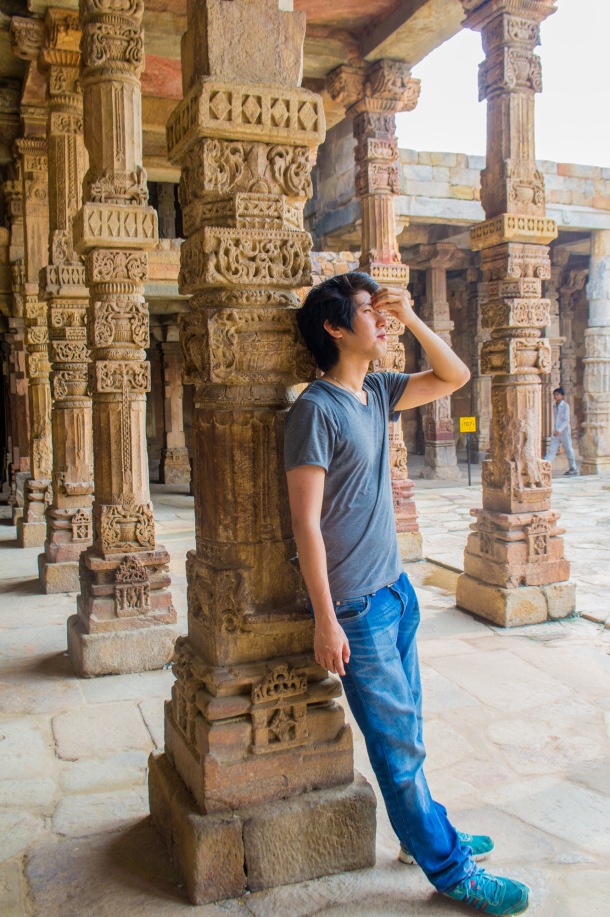 One all boys school seemed particularly intrigued by our “foreignness.” They went out of their way to say “hi” and shake our hands. They also insisted on us taking their pictures, I guess so we would remember them? It was really cute, but after a while we had to find a way out because there was no sign of the photography session ever ending otherwise. There were also security guards walking around who were eager to take our picture for us… for a price (something we didn’t know the first time this “service” was offered). After a while we found ways to dodge them and ask other tourists to take our picture or find a place to set up the camera with a timer (tripods are not allowed). 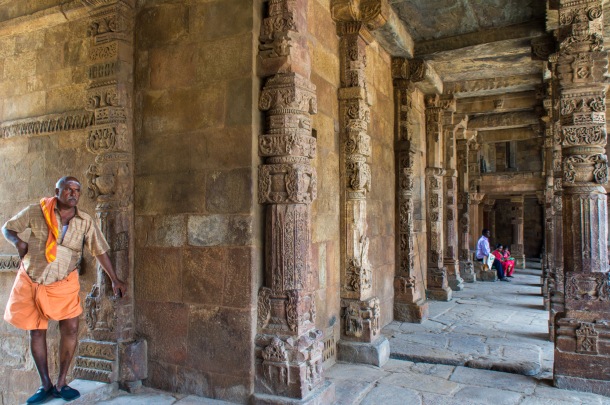 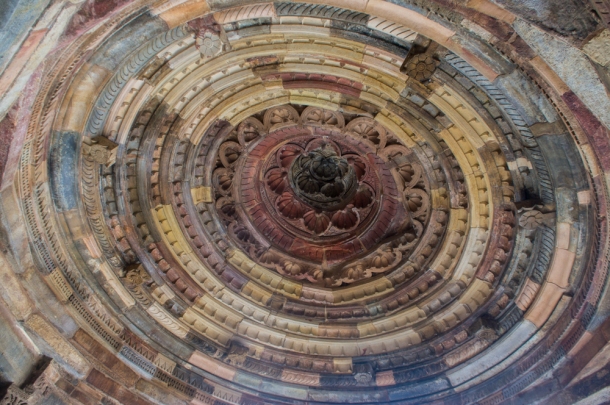 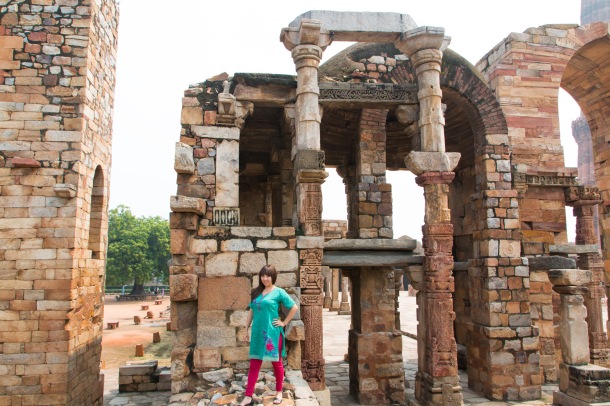 The monuments themselves were literally crawling with adorable squirrels, who were actually kind enough to pose for pictures or approach you if you were gentle enough about it. There were also flocks of beautiful rose-ringed parakeets perched on every tree and in every crevice. In a way, it gave more life to the ancient surroundings. The trees were full and the grass and flowers were so vibrant it seem as though someone had bumped up their saturation. All this color really complimented the earthy red, brown and orange tones of the various structures. 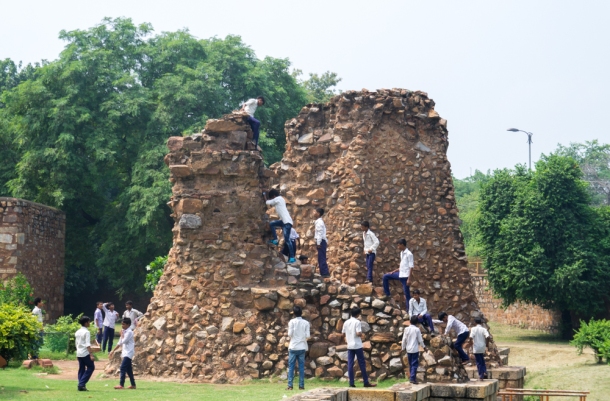 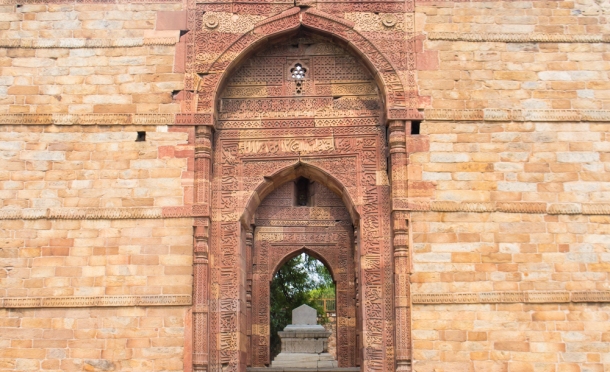 Although we were practically dying in the sweltering heat and humidity, we couldn’t tear ourselves away. I think we explored almost every inch of the grounds and read every descriptive placard about its history. We had originally considered skipping this spot, but I’m so glad we didn’t. It is a definite must see if you are visiting Delhi. I highly recommend it.

If you’re interested in checking it out, here’s some helpful info:

One of my favorite things to do in the spring is find a quiet little spot to sit and enjoy the cool weather and beautiful flowers (preferably with coffee in hand). ☕
Children's Day is a national public holiday here in Korea that is observed every year on the 5th of May.
Spring is in full bloom here in Seoul and I'm absolutely loving all the greenery and flowers (even though some of them come with allergies) 😅
Although it's super short, spring in Korea is absolutely beautiful! @glassofuyu and I have really been enjoying weather and floral scenery.💐
Common Ground is a super cool mall constructed entirely of shipping containers! It's definitely one of Seoul's more unique places to check out.
Starting off the weekend with some cocktails!
Spring is made for brunching! Seoul is full of beautiful cafes that take full advantage of nature and all of its vibrant glory. Outdoor seating, lots of plants and a delicious brunch menu totally won me over at this cafe. They even give you a bit of baby's breath with your order. It's such a lovely touch 💕
I feel like every family has at least one photobomber in the mix. This is ours 😆
Sometimes it's nice to grab a light lunch. Nothing quite hits the spot like a good sandwich and some coffee 🥪☕